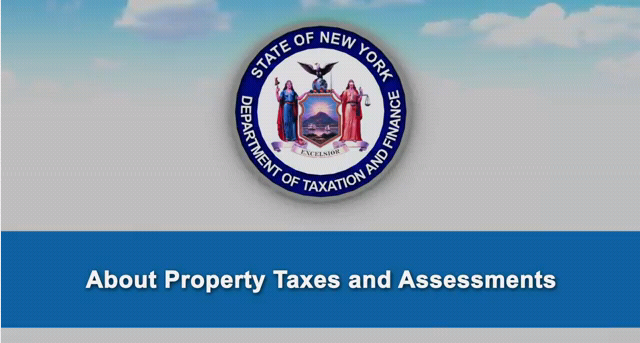 Video: About property tax
and assessments

In New York State, the property tax is a local tax, raised and spent locally to finance local governments and public schools. While the State itself does not collect or receive any direct benefit from the property tax, this tax is still of major importance as the largest single revenue source for the support of municipal and school district services.

Property taxes are based on the value of real property

The property tax is an ad valorem tax, meaning that it is based on the value of real property. Real property (commonly known as "real estate") is land and any permanent structures on it.

Unlike many states, there is no personal property tax in New York. Rather than taxing items such as jewelry and vehicles, only real property is taxed.

Where the property tax goes

School districts are the largest users of the property tax. In fiscal years ending in 2009, local governments and school districts outside of New York City levied $28.87 billion in property taxes. Of that, 62 percent was levied by schools and 17 percent by counties. The remaining 21 percent was divided among towns, special districts, cities and villages.

Determine if your local taxes are increasing

To determine if your local taxes are increasing, you should examine tax levies not tax rates. Tax rates are not accurate indicators of how much more a school district or local government is collecting in taxes this year. This is because tax rates are based on the total taxable assessments in school district or municipality. If the value of property in the jurisdiction changes, that will skew the tax rate. For example: