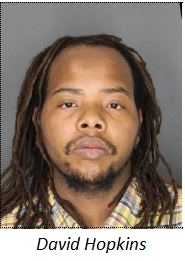 The New York State Department of Taxation and Finance today announced that the former operator of a Buffalo business has pleaded guilty to grand larceny and criminal tax fraud.

The defendant admitted to collecting $69,717 in sales tax from his customers during the years 2012 through 2016, but failing to remit the tax to the state as required by law.

Hopkins, released on his own recognizance, is expected back in court on November 8 to face a sentence of up to one year in jail. He signed a court order agreeing to repay New York State the full amount of sales tax owed. He’ll also be assessed an additional fine for penalty and interest following his sentencing.

“When businesses fail to remit the sales tax collected from customers, as in this case, they deprive the state and the communities where they operate of revenue needed for vital services, and put honest merchants at a competitive disadvantage,” said Acting Commissioner Nonie Manion. “We will continue to work with our partners in law enforcement to bring those who disregard their tax obligations to justice.”

The department’s Tax Bulletin Sales by Restaurants, Taverns, and Similar Establishments (TB-ST-806) explains when the sales of food and beverages (both alcoholic and nonalcoholic) made by restaurants, taverns, and other similar establishments are subject to sales tax.

You can report tax evasion and fraud online at the Tax Department's website or by calling 518-457-0578. The information is kept confidential.