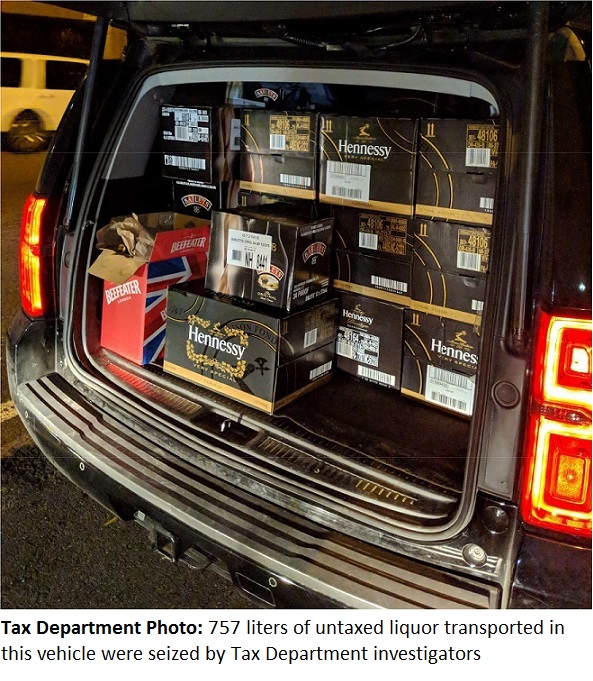 The New York State Department of Taxation and Finance said today that a New York City resident has been arrested for bringing a large quantity of liquor into New York from another state, apparently with the intent of selling it here.

Juncheng Chen, 45, of 136-18 64th Road, Flushing, Queens, was arrested by investigators with the Tax Department’s Criminal Investigations Division after his vehicle was stopped by New York State Police in Rye, NY. The vehicle was packed with 757 liters of liquor, which Chen allegedly purchased at five different liquor outlets in New Hampshire.

Chen was arraigned in Rye City Court and charged with two felonies, one for possession of more than 360 liters of liquor untaxed by New York State, the other for acting as a distributor while not being registered as a distributor in the Empire State. He pleaded not guilty and was released on his own recognizance.

“Alcohol-related tax evasion, as this case clearly shows, is on our radar,” said Acting Commissioner Nonie Manion. “We’ll work with all levels of law enforcement to tackle the problem head-on.”

A liter is a little more than 34 fluid ounces; 757 liters would equal about 1,600 pints. The defendant allegedly evaded at least $1,288 in New York State liquor taxes.

The defendant is scheduled to next appear in court on December 12. If convicted, Chen could face a sentence of up to four years in prison.

A criminal complaint is only an accusation; the defendant is presumed innocent until proven guilty. The case will be prosecuted by the Westchester County District Attorney.